The Five Dysfunctions of a Team Patrick M. Lencioni

This book is a leadership fable about a tech company that is struggling to get more customers. The C level is not working as a team, and they have a hard time coming to any agreements which result in negative morale. Until the new CEO, Catherine Petersen, joins the team, and she is able to recognize the problems and help the team overcome them by understanding the situation.

This is the first book I read from the author Patrick Lencioni, who is an American writer who writes books on business management. He is the founder and president of the Table group, a management consulting focused on organizational health.

Kathryn Petersen, Decision Tech’s CEO, faces the ultimate leadership crisis: Uniting a team in such disarray that it threatens to bring down the entire company. Will she succeed? Will she be fired? Will the company fail?

Throughout the story, Lencioni reveals the five dysfunctions which go to the very heart of why teams even the best ones-often struggle. He outlines a powerful model and actionable steps that can be used to overcome these common hurdles and build a cohesive, effective team.

The fear of being vulnerable prevents team members from building trust with each other.

This occurs when team members are reluctant to be vulnerable with one another and are unwilling to admit their mistakes, weaknesses or needs for help. Without a certain comfort level among team members, a foundation of trust is impossible.

The desire to preserve artificial harmony stifles productive ideological conflict within the team.

Teams that are lacking on trust are incapable of engaging in unfiltered, passionate debate about key issues, causing situations where team conflict can easily turn into veiled discussions and back channel comments. In a work setting where team members do not openly air their opinions, inferior decisions are the result.

The lack of clarity and/or buy-in prevents team members from making decisions they stick to.

Without conflict, it is difficult for team members to commit to decisions, creating an environment where ambiguity prevails. Lack of direction and commitment can make employees, particularly star employees, disgruntled.

The need to avoid interpersonal discomfort prevents team members from holding each other accountable for their behaviors and performance.

When teams don’t commit to a clear plan of action, even the most focused and driven individuals hesitate to call their peers on actions and behaviors that may seem counterproductive to the overall good of the team.

The pursuit of individual goals and personal status erodes the team’s focus on collective success.

Team members naturally tend to put their own needs (ego, career development, recognition, etc.) ahead of the collective goals of the team when individuals aren’t held accountable. If a team has lost sight of the need for achievement, the business ultimately suffers. 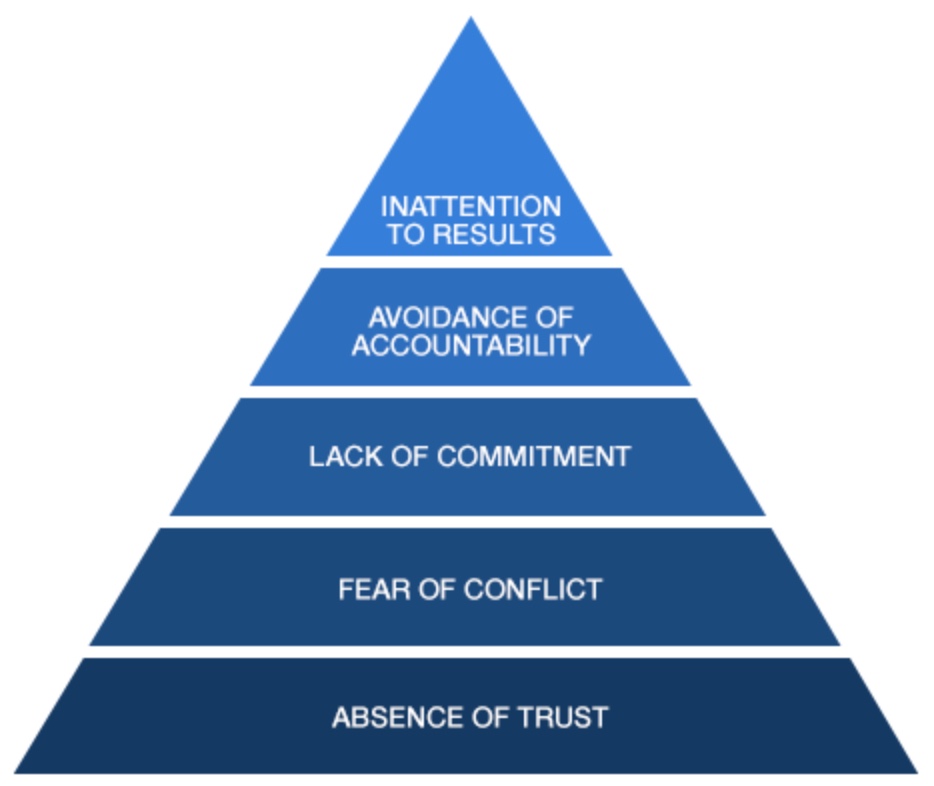